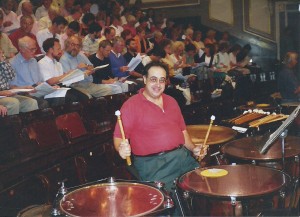 Here I am at the Usher Hall, Edinburgh, with the Festival Chorus in the background.

What is “Have Drums, Will Travel!”?

Have Drums, Will Travel is the moniker for my free-lance music services, which I have been engaged in ever since my return from Oslo, Norway in 1998. I had served as principal timpanist of the Oslo Philharmonic for fifteen seasons before returning to the United States, and from then on, I was in the free-lance pool. As I alluded to in the introductory blog post, the name “Have Drums, Will Travel” is an affectionate reference to one of the old TV westerns I used to watch when I was younger, called ‘Have Gun, Will Travel.” Starring Richard Boone, it ran for several seasons and featured Boone as the hired gunfighter Richard Palladin. With all the hauling timpani from gig to gig and traveling for nearly eighteen years, I kind of felt like Palladin myself, hence the name of my free-lance work.
I was timpanist of the Illinois Philharmonic and Elmhurst Symphony Orchestras from 2003/4 until 2015/16 and have also played with the Elgin, Kenosha, Northwest Indiana and Lincoln’s Symphony Orchestras. I was timpanist of the Des Moines Metro Opera Festival Orchestra from 1998 until 2016. I am currently semi-retired from the music field, but keep my hand in as timpanist with the Black Hills Symphony Orchestra and Rapid City Municipal Band.