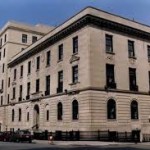 The years 1972 through 1975 comprised my final years at Manhattan School of Music. My senior year was 1973 -74, and I elected to do a one-year Master’s program during the 1974-75 school year. MSM was offering this one-year program, and it seemed like a good way to earn a master’s degree in the shortest amount of time.
In many ways, these two years were among the happiest of my college career. I had entered MSM as a work-study student, which meant that I was given financial assistance to attend school, in return for doing some routine assignments, such as setting up for orchestras and striking the setups afterward, or working in the library. For most of my first three years, I was on setup detail. I was grateful for the chance to pay back the debt I owed the school for its financial assistance, but I was not overly fond of messing with chairs and placing them in an orderly fashion, although my viewpoint would soon change.
At the end of beginning of my senior year, I was assigned the position of student orchestra manager, as I had done rather well in getting the orchestras set up and ready go in a more than timely manner. Also, the student who previously held that position had moved on to other things, and had recommended me to the authorities. The position included overseeing both the student set-up crew and librarians, making sure that the set-up plans were followed exactly, taking attendance at rehearsals and performances, reporting to the Director of Performance regarding attendance, and liaising with the conductors, as well as conveying any announcements to the orchestra members. It was not an easy task, but I took to it rather well, and I held that position for both senior and graduate years.
I had the good fortune to work closely with the school’s conductors, Maestros Anton Coppola and George Schick. I have written much about Maestro Coppola in earlier blogs, but I have not said much about 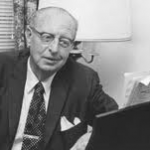 Maestro George Schick (1908-1985). Maestro Schick was born in Prague, and was an assistant conductor at the Prague Opera before coming to the United States. He served in the U.S. Navy during the Second World War, and after the war, he conducted at the San Carlo Opera, Miami Opera Guild and served as musical assistant and assistant conductor of the Chicago Symphony Orchestra during the tenure of Rafael Kubelik. After his stint in Chicago, he became a conductor and coach at the Metropolitan Opera, where he headed the Metropolitan Opera Studio. In 1969, he was appointed President of Manhattan School of Music. When I knew him, he was about sixty-three years of age and a dignified presence. He was the opposite of Maestro Coppola, quiet and reserved where Maestro Coppola was outgoing and dramatic. Both were exceptional musicians, with Maestro Coppola excelling in the Italian and French operatic repertoire, and Maestro Schick being particularly good in the German – particularly Mozart.
It was an honor and privilege to work closely with these two gentlemen, maybe even a little daunting at first. Maestro Coppola knew me from Rep Orchestra, but it took Maestro Schick a little while to warm up to me, and myself a while not to be awed by the President of the school. He was always cordial and encouraging, but one did not “kid around’ with him; that was simply not his way. In time, we worked extremely well together, with Maestro Schick asking me “Well, Mr. Simco, what do we have today?” before every rehearsal. He got so used to me playing timpani for him during my graduate year, that when I managed the orchestra for a concert in which I was only playing percussion, he asked “But why are you not playing timpani?” I suppose I should have been complimented.
As orchestra manager for the Manhattan Orchestra, which in addition to several full orchestral concerts during the season, split into an opera and chamber orchestra during the periods when opera productions were given, I came into close contact with the stage manager, Martin Streicher. Known as Marty to all, he was a silver-haired extrovert who handled the stage operations for the Borden Auditorium, where all concerts and productions were presented. He was basically a nice guy, but could be a demanding boss. H supervised all of us – making sure I kept up to snuff, but was particularly demanding in opera productions. I remember getting a rocket in the ear from him when the lighting in the pit wasn’t up to snuff. I did not know at the time that this was in my purview, but I learned that afternoon, and made it my business to see that all was in order. He kept on my case through most of my time there, but in the last few months, he appreciated that I finally got the hang od being a good orchestra manager and let up.

Some memorable moments from those years included performances of Jaromir Weinberger’s “Schwanda the Bagpiper” under Maestro Schick. This opera is rarely performed, which is too bad as there is a lot of fine music in it. Rehearsals were intense, but in a different way than was the case with Ward’s “The Crucible” under Coppola back in 1971. Maestro Schick expected you to know your stuff, and if you did your part well, all was well. But if you miss rehearsals without explanation (as one of my percussion colleagues did), he could be tough, quiet about it but tough. The performances were first rate, and my friend Ferenc Gal, who sang the part of the Devil was a great hit.
My first experience with Sibelius came in October of 1974, when I played timpani in a performance of the

1st Symphony under Maestro Coppola. I remember this occasion very well, because this was one of the few times that Mr. Hinger, my mentor was able to break free from the Met to come up to MSM and actually hear me play. He met my parents and apparently they had a nice chat prior to the concert. My mom later told me that “Your teacher was playing right along with you – he sat behind us and I could hear his feet moving as if he were doing the pitch changes with the pedal!” It was great success, and I was glad to have the experience, and to have Mr. Hinger meet my greatest supporters!
Other moments: Brucker 4th Symphony – also under Maestro Coppola; a run- out concert to the Kent School in Connecticut with the Chamber Orchestra under Maestro Schick. This was an old day event – I not only played timpani, I managed the orchestra, and together with percussionists Bob Petta and Carl Rendek, we were in charge of getting the instruments and equipment to Kent and back to MSM, all in one day. The program included Ravel’s “Mother Goose Suite” and Mendelssohn’s 4th Symphony. Carl and Bob actually drove the rental truck with the equipment, while I went with the rest of the orchestra in the bus. All went well – the concert was a great success, and the guys managed the transportation well enough – except for a wrong turn which had them on the Bronx River Parkway – which did not allow trucks at the time – and still does not to this day. Apparently, they got off the road real fast and found an alternate route.
Beethoven’s Third and Brahms 2nd at Riverside Church were also memorable occasions. Brahms 2 marked the last concert I played at MSM – my Master’s graduation took place shortly therafter.

The Graduation That Almost Wasn’t – And an Unexpected Surprise

Graduation in 1974 was straight-forward – I received my B. Music degree in a ceremony with cap and gown and all the assorted hoopla that is normally associated with graduation. I was expected to go through it a second time in June of 1975, this time for my Master of Music degree. However, I wasn’t having any of that, and I told my good friends Harry Searing and Sandy Decepoli just that. I also told a few other friend about it, and it got back to the administration. I wasn’t being obnoxious about it. I had just had it with ceremonies and just wanted to get the degree and move on. As far as I was concerned, they could mail me the degree and that would be the end of it. I could never figure out why Harry and Sandy were so insistent that I change my mind. I remember arguing with them, not quite heatedly, but almost. I figured that if it were that important to them for me to be there, then I would go. Little did I suspect that they knew something that I did not. Apparently, my anti- graduation attitude get back to the administration, which was in the process of giving me the Josephine Whitford Award for Achievement – just the third in the school’s history – Peggy Eason and Linda Barnes were previous recipients, and Dean Whitford herself begged Harry to try and convince me to change my mind. (I learned all this after the fact.) I went to the graduation, and I must admit I did so with a very skeptical eye. I told Harry and Sandy that this was all “a dog and pony show” and something to the effect that all these awards were bunkum. Well, so much for my attitude. I do know I forgot to shave that day, although my beard hardly showed, but Dad got on me a little later (this was the first year that I had been living away from home) and reminded me that appearances were important. He was right, of course.
The upshot was that I received my Master of Music, and something else as well. After most of the awards were announced, and the winners had received due attention, I was stunned as my name was called out as recipient of the Whitford Award. Harry was seated by me and he said ‘Now, do you see why we got on your case about coming to graduation?” I was completely flummoxed and almost had to be pushed on stage to accept the award. It came with a check in the amount of $100. I accepted the honor as graciously as a socially awkward 22 year-old could and sat back down, not a little embarrassed. It served me right for all that previous bombast.
Of course, my parents and relatives were delighted, and we all had a nice visit afterwards in the Newhouse Pavilion. Later that day, Harry and Sandy and I along with a good friend of mine went to a barbecue at Harry’s parent’s house in Tottenville, Staten Island. We had a great time, and stayed there quite late. Most of the time, I was the target of friendly teasing from my friends about “awards being bunkum”. Nonetheless, it was a great end to my college years. It was time to put my knowledge to work.