Jansons – The Oslo Years – A Personal Assessment – Part One

Back in 2020, Warner Classics, which now owns the rights to recordings made by the former EMI record label (among others), gathered together all of the recordings made by the late Mariss Jansons and the Oslo Philharmonic Orchestra. There were twenty-one recordings made between the years 1987 and 1997. All were eventually released on compact disc, although if memory serves, I believe the first few releases were on all three mediums – vinyl, cassette, and compact disc. By 1989, all the rest were released mainly on the latter media. 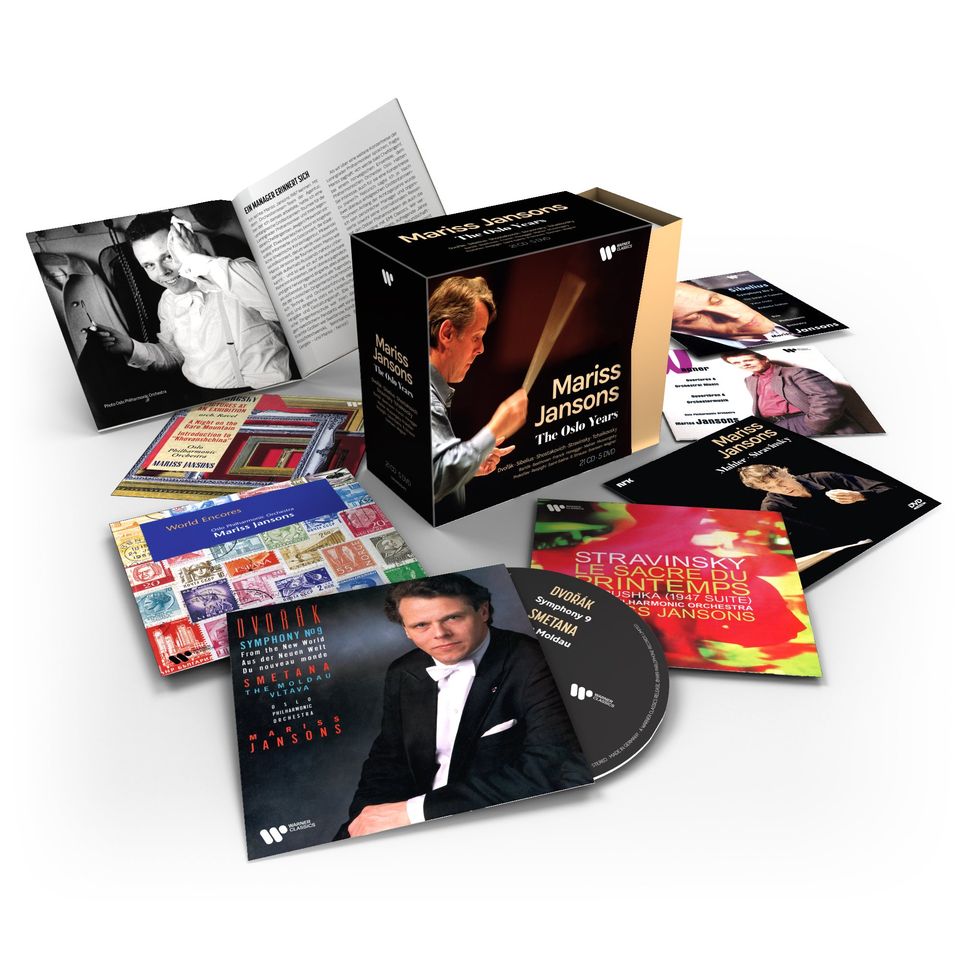 When I first saw the box advertised on Amazon, I thought long and hard about obtaining a copy. I started weighing the pros and cons. On the side of the “pro”, it would allow me to consolidate my collection and give ma a little more space – as a member of the orchestra, we were given one complimentary compact disc of each release, and I had collected all of them by the time I moved back to the USA in 1998. They were taking up quite a bit of space and with each move, we downsized. By the time I moved to Rapid City, South Dakota at the end of 2015, shelf space was at a premium, to put it mildly. I had already disposed of most of my books and many of my recordings, keeping only those that were most meaningful. Needless to say, the recordings I made with the orchestra were not going to Half-Price Books.

Another “pro” was the added bonus of five DVDs containing video recordings made by Mariss Jansons and the orchestra between 1985 and 2002 for the Norwegian broadcasting corporation or NRK. I was involved with many of these broadcasts as well, although several were made after my departure. Still, the thought of having the whole nine-yards – compact discs included – in once place was almost irresistible.

The only “con” that I could think of was did I really need it? I had the original compact discs, and I found that I was able to view some of the TV broadcasts on the NRK website. The down side to viewing them on the NRK website is that the broadcasts are archived and were available only for a limited time. Most of the ones that I viewed are no longer available. Taking this into account, and my curiosity to see the broadcasts and hear the reissues of the EMI recordings, I threw caution to the winds and ordered a set using my Amazon account. As to the problem of what to do with my original compact discs, the solution was at hand. My daughter is fond of classical music and she married a man with similar tastes. They now have my originals.

The box arrived via USPS in a very timely fashion, and I carefully unpacked it. The slip case is of the pull-out variety, and the discs plus booklet are comfortably and neatly packed, with the compact discs in order of release. The booklet contains two articles. The first is written by Marit Gaasland, who served for many years on the staff of the Oslo Philharmonic as administrative assistant to Mariss Jansons. It is an overview of Mariss Jansons’ tenure in Oslo from the day he first guest conducted the orchestra in 1975 until his departure in 2002. It makes for interesting reading, especially since I was a participant in many of those recordings, concerts and tours from 1983 until 1998.
The second is by Stephen Wright, who was Mariss Jansons’s concert agent for two decades, and is an accurate appraisal of Mariss during this period.

I’ll give my personal assessment by going through each recording individually. I’ll comment on each and giving what I think are each recording’s strong points as well as any weaknesses. Mind you, I have to say at the outset, that as a participant in these recordings, I am not unbiased. I am also writing from the perspective of a member of the orchestra and a timpanist who had the honor to sit, in the words of Tom Akins, “behind the copper fence” of the Oslo Philharmonic for fifteen seasons and make great music. I had the privilege of working with a man who was well on the way to becoming one of the great conductors of our time. It was a great ride! 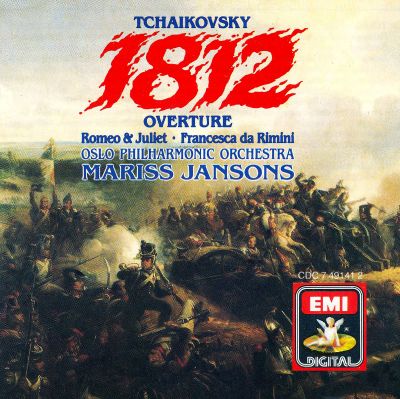 This was the first recording in the series for EMI. All of these recordings were made in the Oslo Konserthus (Oslo Concert Hall), and this recording took place in April of 1987. The producer for this recording was David R. Murray, and the sound engineer was Mike Clements. These two gentlemen served in the same capacities for the next two recordings. I have already talked about my own preparations and instruments used in previous posts, so I’ll keep to the musical assessments here.

There are three compositions on this recording, and they are: Francesca da Rimini; Romeo and Juliet, and the Overture Solennelle 1812. Francesca da Rimini was recorded first, followed by Romeo and Juliet and then the 1812 Overture. Playing it in and recording each of these works was fun and quite challenging. Listening to the playbacks during the actual sessions was an education, because what one heard on stage was rather different than what the microphones picked up. (NB: The Oslo Konserthus was and remains a very difficult acoustic to play and make recordings in. The mid-range and high frequencies are favored to the detriment of the bass frequency, of which there is almost none.) Adjustments were made of course, and when the recording was releases, first on vinyl and then later on compact disc, I was not particularly pleased at the time. While the orchestra’s performance was first rate and the conductor’s interpretations were above reproach, I felt that for all the block-buster playing, the hall’s acoustics let us down.
Thirty-odd years later, in listening to the recording as reissued, I heard a lot more detail and actually enjoyed listening to the performances. All are good, and are of high quality. There is a saying, attributed to my mentor Fred Hinger, who said – “Don’t listen to the recordings you make just after you record them; you’ll hate them. Wait twenty years, and you’ll love them.” You know what? He was right. It was a matter of perspective. Enough time elapsed to allow me to listen with a broader view – to listen to them as a member of the audience and not a participant. They are energetic and never dull, and the extra brass and bells at the end of 1812 add just the right note of festivity, and the cannon shots (performed by our orchestra manager at the time Terje Mikkelsen) are perfectly timed. A good release, and it was good to hear it in reissue.

The Shostakovich Symphony No. 5, Op. 47 was our second recording for EMI and was recorded in June of 1987. This was going to be the block-buster work on our upcoming tour of the USA in the fall, so the powers-that-be decided to “get it in the can” as soon as possible. Recording it was quite the experience. I was only about three-and-a half-years into my tenure and was learning a lot and had yet to learn much, much more. The recording team was the same, and I think by this time we were all getting used to each other. After the recording was issued (in time for our 1988 tour of Japan), I remember liking the results a bit better than the Tchaikovsky. There was more “oomph” in the sound, plus the right amount of energy.
Mariss was a master Shostakovich conductor, and the energy and commitment he conveyed in this recording should not be underestimated. Listening to this after many years, I still feel the same way. The depth of emotion, especially in the third movement is brought out in a way that only Mariss could. He later re-recorded this with the Vienna Philharmonic, and that recording wound up in the complete Shostakovich box issued by EMI, while this was relegated to the sidelines and not available for many years. In fact, to be blunt, this recording was kicked to the curb, do to speak.It’s a great pity, as I think that, VPO polish aside, this is the more interesting recording. Even better in re-release!

Johan Svendsen: Symphonies No. 1 and 2

The recording pace, which was usually one or two during the period we recorded the Tchaikovsky symphonies, picked up considerably during the EMI era, which lasted from 1987 through 1987. We managed to slip three recordings into the 1987 recording season, the Svendsen symphonies being the third recording of 1987. I was particularly interested in this one when we recorded it as I was using a new set of Light Metropolitan B timpani and a 31 inch Continental chain and was curious to hear the result. I was having problems with the Remo hazy head on the 31 inch and was curious to hear how it “recorded”. To my ears, the sound “stopped” about several inches above the head, or appeared to do so. There was no one sweet spot. It didn’t sound bad, but just lacked bloom.
In the end, it sounded well enough for the purpose of recording the Svendsen Symphony No. 2 – I used only the middle Met Bs for the Symphony No. 1. And how did it all turn out? Well, quite well actually. The original release was quite good, and thirty odd years later, it sounds even better. My personal favorite is the 1st Symphony – full of energy, and Jansons gives it every bit of his considerable energy, and the orchestra responded beautifully. The second movement is soulful, and the performance of it is of the highest quality. The Second Symphony is an excellent piece, but it had to grow on me. The timpani part is a bit muddy, and to his credit Jansons had me down-play some of the more muddier parts, and the result justified his decision at the time. Listening to it again at this remove, I have grown to enjoy it. The playing of the orchestra is first rate. I just wish that EMI had let us record the other orchestral works!

Stand by for Part Two! I had hoped to do this all in one blog-post, but on reflection I think it better to do it this way as it seems to be more manageable.