In my previous post, I had planned to cover the events of the whole of 1989, but as with 1987 and 1988, that year proved to be most eventful, in like manner I have no choice but to divide it up more than one blog post. The previous post dealt with the events of the early part of the year – our recording sessions of the music of Respighi, Ravel, and Dukas as well as our Swiss/German/Austrian tour and that memorable trip to Kolberg Percussion GmbH in Uhingen. Those were and remain great memories.
The rest of 1989 was scarcely less so, what with our second trip to the BBC Proms in August and the Oslo Philharmonic’s 70th Anniversary Concert and celebration, which included a recording sessions for Mahler’s 2nd Symphony, the “Resurrection”, which incidentally happens to be one of my favorite pieces. Christian Berg officially joined the orchestra on August 1st, finally filling the principal percussion vacancy and signaling the beginning of a career with the orchestra that is twenty-eight years and counting. It was my pleasure to work closely with him for nine of those years.

All of the major events of 1989 took place from August through November. As soon as Christian was in place, it was time for us to begin preparations for our visit to the BBC Proms, which was scheduled for mid-August. Our first visit to the renowned music festival, which is held in the venerable Royal Albert Hall, was back in August of 1987, just after the death of our good friend and colleague, Per Melsæter. Even thought that was a great success and led to our being invited back, it was not performed under the happiest of circumstances. This time around was different. The circumstances were different – a new colleague – a new season, and great programs. As with the previous festival, we would perform two concerts. The first program was scheduled for Tuesday, August 22nd, and included Paul Dukas’  The Sorcerer’s  Apprentice; Arthur Honegger’s Symphony No. 3 “Liturgique” and Tchaikovsky’s 4th Symphony. The next program, played on the 23rd included Richard Strauss’ Don Juan; Elgar’s Cello Concerto with Truls Mørk as soloist; Arne Nordheim’s Nachruf and closing with Igor Stravinsky’s “Petrouchka”. The concert program lists it as the 1911 version, which has a larger version, and which I personally prefer, but no; it was the 1947 version, with its smaller orchestration. Still, it’s a fun piece!

Like our previous visit to the Proms in 1987, this would be a four day event- travel to London on the 21st of August – concerts on the 22nd and 23rd, and return to Oslo on the 24th.  The nice thing about our visits to the Proms – we had our warm-up rehearsals on the day of the concerts early enough to have a bit of time to go shopping. I can tell you that I made a bee-line for the EMI record shop on Oxford Street and then to Tottenham Court to the greatest bookstore on earth – Foyle’s.
When we had Prom tours like these, I focused on purchasing CDs and books, leaving touring to our days off on longer tours. I figured if you had a rehearsal from ten to twelve in the morning, and a concert in the evening, not to schedule any touring, but have an objective in mind – in this case the EMI shop and Foyle’s. This made for a less stressful afternoon, as I could plan my shopping and be back to the hotel in time for a quick nap before the concert.
Playing at the Royal Albert Hall is always fun. Looking out over that vast auditorium – it holds 6,000 people – reminds me of looking out over the Grand Canyon – and one would think that the acoustics would be a bit over-reverberant, but that is not really the case. I have had no trouble hearing the orchestra on stage clearly, both from my position in the orchestra, and listening in the auditorium – especially when I had the opportunity to hear other concerts on a night off on later tours with the Norwegian Chamber Orchestra. It is a good hall to play in. Before leaving Oslo, we played the concerts “in” in Oslo, leaving only some “fine-tuning” work to be done in these rehearsals. The concerts themselves went well. As a matter of fact, the orchestra took well to playing at the Proms –each of our tours was a “tour-de-force”, and this one was no exception. “Petrouchka” was scintillating – Mariss always a had a way with that piece – he really made it the puppet come to life with his interpretation – and the Tchaikovsky 4th  Symphony was – well, what can one say when you have one of the greatest interpreters of Tchaikovsky on the podium? I have listened to many recordings of Tchaikovsky Number Four over the years (and they all have their fine points) and  have played it many times since my Oslo days, but I keep coming back to Mariss Jansons’ interpretation as the baseline interpretation. That in itself speaks volumes. The audiences at the Proms always liked to greet the orchestra when the came out on stage with a “Thank you for the Christmas Tree.” Apparently, the Norwegian government sent over a spruce tree every Christmas, and the crowd was reciprocating with a thank you.
All of us were happy with our performances, and we went home with yet another feather in our collective cap. My only regret is that I did not take many pictures this trip – only a few from one of the rehearsals at the Royal Albert Hall. (As a matter of fact, I cannot find any in my files! Drat!) For timpani, I believe I used the Light Metropolitan Bs, as we by now had the full set of four pedal timpani. They always sounded good in concert, especially on tour, and were easy to manage.

I will leave recording of Dvorak’s 5th Symphony for EMI for a separate blog post, except to say that we did record it in the fall of 1989. The main event of the fall of 1989 was the celebration of the Oslo Philharmonic’s 70th anniversary. To commemorate this milestone in the orchestra’s history, it was decided by the powers that be that the orchestra would give a pair of performances of Gustav Mahler’s Second Symphony, known as the 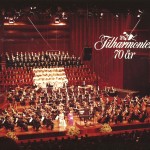 “Resurrection” Symphony. Since that is among my all-time favorite symphonies, it is needless to say that I “was over the moon”with excitement. I think we all were, as a performance of this work is always a major undertaking, involving a very large orchestra (including two sets of timpani and a large percussion section), chorus, offstage orchestra, organ and a soprano and contralto soloists. In addition to the performance, the orchestra was to be invited to a special dinner held at the Grand Hotel, Oslo’s premier hotel and restaurant venue. This was by special invitation, and all of us were very much looking forward to it. On top of all this, the administration decided to invite our old recording company, Chandos Records, to record the event. Recording sessions on top of performing it!! I was not only “over the moon” with excitement, I was “out of the solar system!” I will describe the events of the anniversary week, but will not go into too much detail with regard to the recording sessions as I  have already described them in earlier blog post. (NB! I am planning to revisit that particular recording in a special post, to be coming soon!)
The rehearsals went well. The orchestra was joined by the Oslo Philharmonic Choir, as well as the Latvian State Academic Choir from Mariss’ hometown of Riga. The soloists were Felicity Lott and Julia Hamari. The offstage orchestra was located in a corridor below the stage, and the effect they made, particularly in the fourth movement, “Urlicht”, was other-worldly. In performance, it was most effective. Earlier in the year, the orchestra purchased a pair of church bells – c and G from the Olsen Nauen Bell Factory in Tønsberg. We needed a larger and lower bell – an E flat – this we rented from them as well. (I am told that the orchestra has since purchased this bell.) The fifth 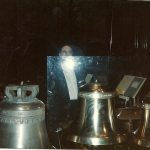 and final movement calls for the use of these bells in a couple of places, one of which occurs during a long passage in which I am not involved. (Normally, I would have gone offstage to play the offstage timpani, at this point, but since the instruments were located below the stage and my exit would have been too obvious, an extra was hired to handle that job, and I was left free to assist in muffling the bells for my colleague Bjørn Løken. He had the bell clapper in his hand, and had to concentrate on the striking, while I was free to literally lean on them and use my body to muffle them at the proper time. The concerts were of high quality, and the King and Queen of Norway (who were at that time Crown Prince and Crown Princess – they represented King Olav V – were in attendance, and the hall was completely sold out. It was also sold out for the second concert as well.
The dinner for the orchestra was given that same week, but I do not remember if it was after the first concert, or on the Saturday evening following. I do know it was a grand affair, held as I mentioned earlier, at the Oslo Grand Hotel’s main dining room. The food was delicious, and there were the usual speeches. The best part of it for me, other than the concerts and the recordings, was the gift of a five pound box of chocolates from the famous Freia Chocolate factory, specially made up for the occasion! A really sweet deal all round.
I remember sitting at table with the record producer James Burnett, whom Chandos had hired to oversee the recording. He was one of the all-time great recording producers, and had overseen many of our recordings for the past few years, and we always found time to chat when he was in Oslo and working on our sessions. This night, he seemed a little subdued, and he confided that he felt “little out of sorts”, although he admitted that he was enjoying himself. He soldiered on through the rest of the period, and it was quite a shock to all of us when we received word in May of 1990 that he had passed away, a victim of cancer. Apparently, he had been feeling the first effects of it at the dinner.
It was an appropriate musical choice for his last recording for us, and one that remains, like the anniversary week and concerts in my memory, ever fresh even today.